At Railforum today, 1 october 2019, Mr. Michael Peter, CEO of Siemens Mobility, held a presentation about the future of signalling. Information can be found on LinkedIn.

The following slide, showing commitment to EULYNX, was shown: 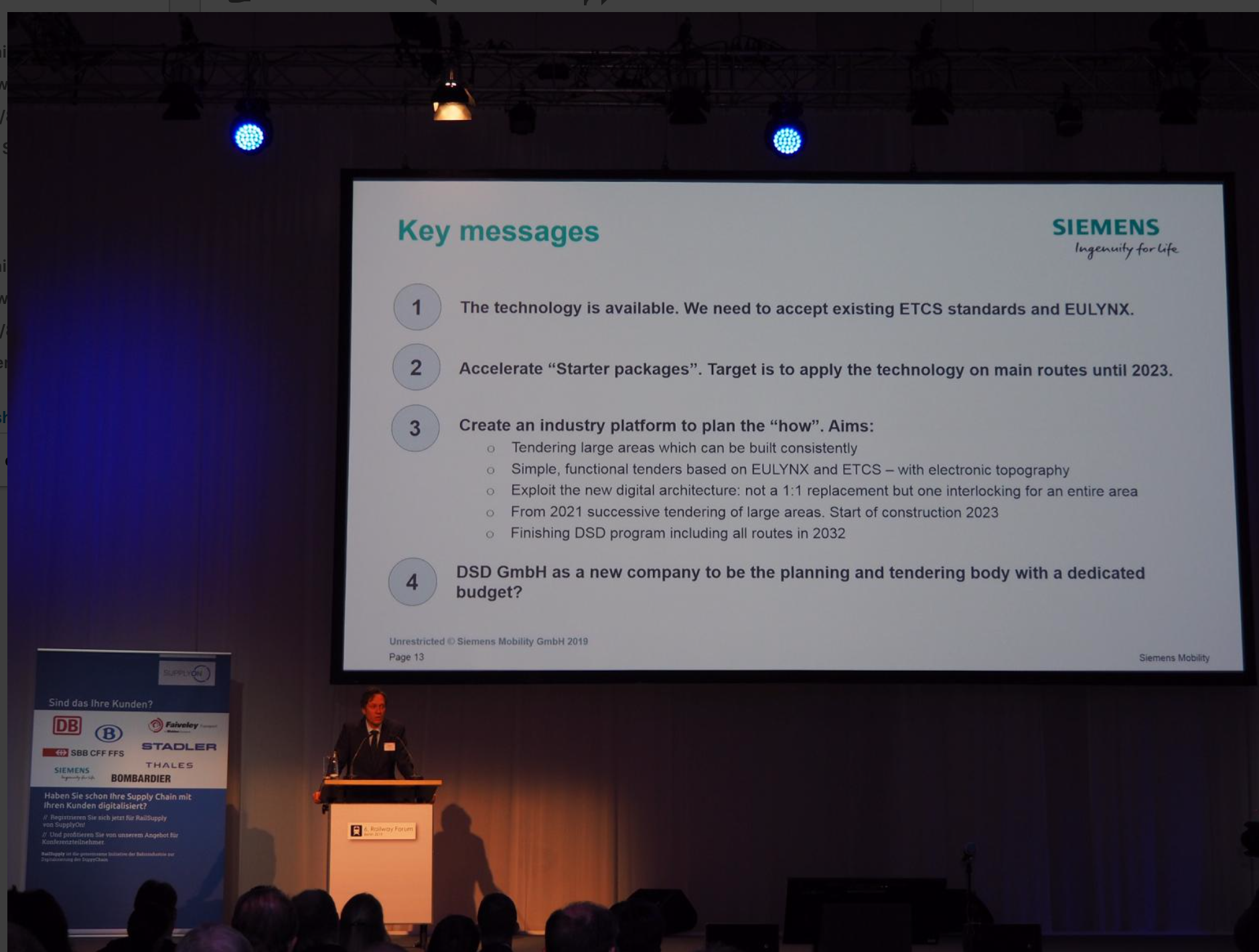 The progress towards a world wide standard have received yet another push. Evidence of that were several presentations during the ASPECT 2019 Conference, organised by the Institution of Railway Signal Engineers (IRSE) and the Delft University (TU Delft). A working example of an Object Controller has been tested in Korea by the Railway Signal Research Association as explained in a paper presented at the conference. A summary can be found image HERE (546 KB) .

We are happy to announce the first update of RCA. RCA Beta is an update of RCA Alpha taking into account feedback from RCA Alpha (from railways, suppliers, sector organizations). RCA Beta mostly deals with corrections, misunderstandings and frequently asked questions.

RCA Beta is released in the form of an updated set of documents from RCA Alpha and with a few additional “Beta chapters” on topics which had generated a lot of interest. New “Beta chapters” include: Platform Independence, Modular Safety, Capacity Effects, Architectural Approach.

If you would like to give feedback or to become involved in the evolution of RCA, please contact us.

RCA in a nutshell: Based on the pdf white paper (213 KB) published in summer 2018, the RCA initiative is driven by several railways organized in EUG and EULYNX. The RCA initiative strives for a substantial improvement in cost, capacity, safety, reliability of the CCS (command, control, signalling) system. RCA starts with radio-based ETCS cab-signalling and EULYNX interfaces and adds a harmonized architecture with clearly defined interfaces leading to an upgradable system with interchangeable components. RCA includes the game-changers such as  ATO, moving block, train-borne localization, FRMCS.

All RCA Beta documents are available for download here.

The EULYNX Consortium has published an updated documentation release Baseline Set 3 Release 3. The release includes updated requirements for the interfaces SCI-LX, SCI-ILS and SCI-RBC. This release also includes the Specification of Point of Service – Signalling, defining the interface to the Subsystem – Communication System. Further consistency updates are included in the reference document list, glossary and domain knowledge.

The next update of Baseline Set 3 is scheduled for December 2019 as Release 4.

All deliverables are in PDF format and available for download under  folder Published documents . If your organisation does not have yet registered access please fill out the  folder registration form .